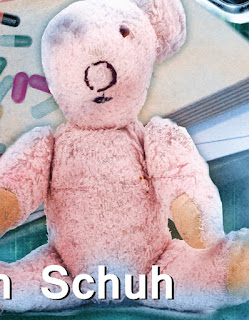 Of all the symbols on the cover of my soon-to-be released thriller, OPERATION MAXTRACKER, the rough-looking worn pink teddy bear is the most apparent. Without thought, potential readers will know there's a child in the story, and perhaps a child in trouble.

We learn very early in the story about an endangered child, so this intensely emotional graphic is not misleading and gives nothing away.

The worn pink teddy bear, the eerie blue binary curtain, the top secret file, the coffee stain, the cellular phone and mittful of drugs--together what these graphics symbolize pretty well sums up the novel.


One other important thing about the cover--

I don't like 'flat' covers and together with Cathy over at Avalon Graphics we worked to get a dimensional feel. We laid the file down, tilting it as if on a desk, we stood up the teddy bear and brought it forward, we used the lines from the phone, the file, the notebook, to draw the eye into the cover, back behind the injured or endangered child, beyond the secrets, deep into the eerie electric blue curtain of binary symbols.

I hope this amazing cover draws you into the story, too. 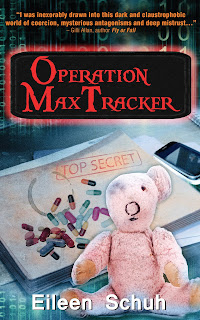 Sergeant Kindle is counting on his top secret Operation MaxTracker team to thwart a surging attempt by criminal gangs to hijack cyberspace and take control of the world.

The tremendous power of the defensive system the team is creating and the potential for its abuse, has computer guru, Katrina Buckhold, on edge. Shrug, Head of Project Security, is supposedly keeping everyone and everything safe, but based on her past experiences with him, she’s not confident he’s up to that task.

Katrina’s toughest battles, though, are not against those threatening cyberspace but against those who are concerned about her ability to raise her children, and Shrug’s not helping with that, either.

Then unspeakable tragedy strikes, stripping all friendships to the core and laying bare stunning truths behind the secrets, mistrust and fears.