Déjà vu all over again...

I mentioned in my last blog that I had re-released THE TRAZ and FATAL ERROR, the first two novels in my BackTracker crime series.

In addition to astounding new covers (thanks, Cathy at Avalon Graphics), a fair amount of editing and revisions took these books up a notch. 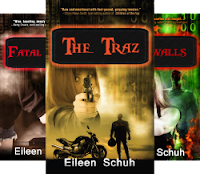 Thanks to my editor, Elaine Denning, some of those improvements involved 'tightening the writing', which in layman's terms, means getting rid of the unnecessary. Those who produce Readers' Digest Condensed versions are masters at this craft.

Here are my top ten pet redundancies that I often find in my writing as well as in others'. The unnecessaries are highlighted.

10. No Trespassing Without Permission
9. She sat down in the chair (or laid down on the bed.)
8. She looked up at the sky
7.  "Stop!" he yelled loudly. "Don't you dare!" she warned.
6. He put the car in reverse and backed up.
5. She closed her eyes and went to sleep.
4. It reminded her of memories of her childhood.
3. "We do not feed our cattle steroids or hormones."
2. I'm Canadian, eh? or I'm Canadian, eh?
1. They found a dead body behind the school. 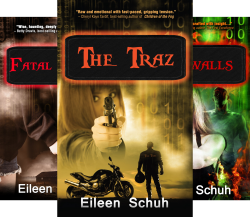 Posted by Eileen Schuh: at 3:27 PM No comments: 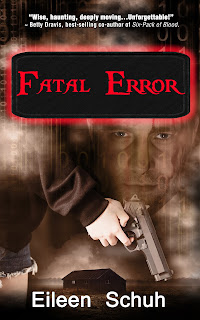 Posted by Eileen Schuh: at 4:52 PM No comments: