Drop Everything and Read event!

Drop Everything and Read (D.E.A.R.) is an international event designed to stimulate the love of books and all things literary.

This weekend The Fantasy and SciFi Network is participating by promoting the wonderful worlds of SciFi and Fantasy with its online D.E.A.R. event. Promotions and special pricing on a plethora of fine novels are rocketing through cyberspace from Friday, April 10th through Sunday, April 12th, 2015.

DISPASSIONATE LIES and SCHRODINGER'S CAT are just two of the tantalizing tales coming at you for only 99 cents. 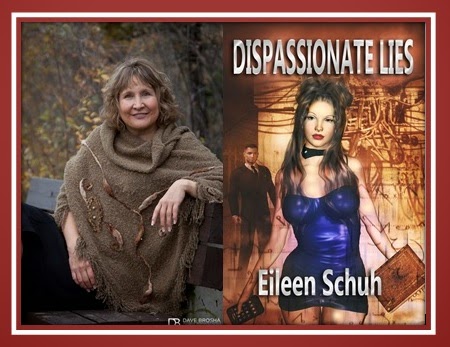 DISPASSIONATE LIES  The year is 2035 and the world is emerging from a devastating economic collapse. Computer guru, Ladesque, finds her task of restoring the world’s internet capabilities, dull until...

She’s approached by Paul, an attractive FBI agent intent on recruiting her to an ultra-secret project. There’s only one problem—the asexuality she was born with thirty-five years ago, vanishes sending her on a quest to uncovering the secrets of her past--not an easy task when all things digital have been compromised...but her future depends on it.

SCHRÖDINGER'S CAT   In one of her worlds, Chorie’s young daughter is dying—a drama that quickly contaminates her other, much rosier, reality. Before long, the emotional burden of dealing with two separate lives spawns heated legal battles, endangers her role as mother and wife, and causes people in both universes to judge her insane. As her lives begin to crumble, so does Chorie’s soul.

For more information on DISPASSIONATE LIES, SCHRÖDINGER'S CAT and other books by author Eileen Schuh, visit her Amazon Author Page
Posted by Eileen Schuh: at 10:00 AM No comments:

You're going to die!

Although that sounds like a line from a thriller, it’s just a basic truth that applies to every one of us—barring some miracle of science or the discovery of the Fountain of Youth. Despite its universal truth, death tends to terrify us. Although that terror serves a purpose in keeping us safe, financing roller coasters, and enriching authors such as Stephen King, it can also immobilize us, cause depression and anxiety, and ruin our lives.

I imagine myself being interviewed at age, say 102, and being asked to what I credit my longevity. I’d reply, “My terror of death.” I believe it is terror that has kept me safe from many harms throughout my six or so decades of living, including self-harm—someone terrified of death simply can’t seriously contemplate suicide, no matter how depressing life might seem. I also could never bungee jump, drive at an excessive speed, take the quad up a steep hill, or inject heroine.

Years ago, I wrote a non-fiction book about the science of death, cataloguing my research into the rational aspects of birth, death, reincarnation, alternate universe, cloning, stem cells, the nature of time, etc. It was never published, but remains a source of inspiration.

Now, I want to write a fictional account of mortality. My hope is that my characters can somehow uncover the true nature of life and death, a truth that has always eluded me. I’ve started the book, but have been hung up for some time. Just as in real life, once I needed definitive answers about death, the words quit coming.

The premise of my story is that immortal beings arrive on earth to study man’s mortality only to come to the terrifying realization that they, too, are now mortal.

“You are going to die!” some cloaked figure cackles from the darkness. “You are going to die.”
“Age-related atrophy…” the medical report reads.
“Pre-arranged funerals!” the ads scream.
“Senior discount?” the teller asks.
“Nana! Nana!” the grandson shouts.
“When I die, I want you to…” the husband says.

Yup. I definitely need to finish that book.

Posted by Eileen Schuh: at 4:29 PM No comments:

Criminal Minds at Work: Behind the uniform...

Criminal Minds at Work: Behind the uniform...:  Legalities and illegalities play big roles in all my novels. The BackTracker Series centers around the lives of a group of officers ...
Posted by Eileen Schuh: at 11:36 PM No comments: