Despite what my headline infers, author Kenna Mckinnon has not let mental illness define her. As a child and teen she led a 'normal' life and had ambitious dreams. However, life abruptly changed when as a young adult she developed schizophrenia.  She remembers the day her doctor told her she must accept that she would never have the life of which she was dreaming, that she must accept the limitations of her disease. Of course, she didn't.
As a female entrepreneur with a very successful business and as a mother, a writer, an author of many published books, she's led a life of successes that far exceeds most.  Not all her books are about mental health, but she has done much writing to promote understanding of her disease. 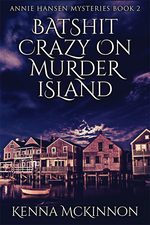 I look forward to reading her new release, Batshit Crazy on Murder Island to not only be entertained but to learn more about schizophrenia...and the people who have it.
Tell us about your new release, Kenna...
Batshit Crazy on Murder Island
Annie’s back!
Batshit Crazy on Murder Island is out, the 2nd in the Annie Hansen Mysteries series.
“…a good dose of suspense and action throughout and I also liked the growing romance between Mark and Annie!” ~ Judith Holmes, Fort Steele, Canada
“What happens when a gang of vicious drug dealers hit the sleepy Canadian town of Serendipity? Annie wakes up to the sound of gunshots…If you enjoy a fast-paced, easy read, with a good dose of suspense and action and unforgettable characters, Batshit Crazy is for you! Pick up Annie’s latest adventure today!” ~ Sean Robins, author of The Crimson Deathbringer series of thriller sci-fi space operas!
Things have been quiet on Serendipity Island, Canada for two years. But this morning, Annie awakens with a start at the sound of gunfire and a jetboat getting away. The golden retriever, Chuckles, and the sleeping Mark heard nothing but Annie is on the job.
There are a large number of perpetrators and a lot of action as Annie Hansen, a twenty-six year old female private eye and her partner, Mark Snow, an RCMP detective track down the trouble.
Annie and her partner were instrumental in solving two gruesome murders on Serendipity in the previous book, Blood Sister, which led to the epithet ‘Murder Island’ by the local media.
Annie suffers from schizophrenia and throughout the book her hallucinations play a small part.
If you enjoyed Blood Sister (Book 1 in the Annie Hansen Mysteries series), you’ll love Batshit Crazy on Murder Island.
Kenna is a Canadian senior woman who owns a medical / academic transcription business. She lives and works in the Canadian city of Edmonton, Alberta. Her spare time is spent reading, writing, walking in a nearby park and the scenic neighborhood in which she lives, and volunteering. Her most memorable years were spent at the University of Alberta, where she graduated with Distinction with a degree in Anthropology. She has lived symptom-free with chronic schizophrenia for many years. She has a beautiful daughter and three wonderful grandsons.
Books may be autographed by texting 780-318-7269 or email at: contact@KennaMcKinnon.info
So many friends and family have contributed to the genesis and final execution of this second in the mystery series of Annie Hansen, who suffers from a grander yet more gentle version of the illness that Kenna knows so well.
This book is dedicated to her daughter, Diane, and her late son Steve with treasured memories and all her love. The Annie Hansen series is also dedicated to all who are touched by mental illness, in its many ramifications, and the possibility of love, career satisfaction, and self-actualization for those previously marginalized and ignored by “mainstream” society.
As well as those friends and family members often injured by our random and sometimes thoughtless acts. If you enjoyed either or both books in the Annie Hansen Mysteries series the author and publisher would be grateful for a short yet honest review. Have fun with it and happy reading, dear friends!

Blood Sister
Kenna McKinnon, Author
Find Kenna on Facebook
Find Kenna on LinkedIn
Crazy Story has been brought to you by The W.Olf Project 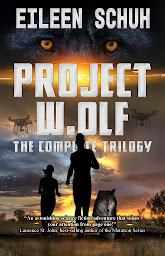 "Absolutely nothing, though, can prepare them for the stark truth."
Eileen Schuh, Author
FIREWALLS
FATAL ERROR
Schrödinger's Cat
THE TRAZ
Web site: http://www.eileenschuh.com
Blog: http://eileenschuh.blogspot.com
Posted by Eileen Schuh: at 9:23 PM No comments:

Pauline Barclay : Between the Sun and the Rainbow

The pandemic has been wickedly hard on so many of us. Just when we most needed the support systems we had worked so hard to develop, they were ripped away from us by lockdowns, quarantines, isolation, stay-at-home orders, masks...

Now as we try to emerge from the clutches of Covid, we face not only terrifying variants but all those deep seated fears that have been ground into our consciousness over the past 18 months--fear of others, fear of getting the virus, giving the virus, fear of travel, of laughter. Fear of 'normal'.

Artists, musicians and writers struggle with their own fears as they attempt to do their job of helping the world cope, offering hope, keeping us sane.

Sometimes the only way out, is escaping reality...with a 'cosy mystery'. I'd say it was rather serendipitous that my friend and British writer Pauline Barclay dropped me an email and offered to take me and my friends, family and fans on a journey.

A huge thank you Eileen for having me back on your wonderful Blog to talk about my latest publication, Serendipity.

Lockdown and restriction have been tough for everyone. Mentally, people are exhausted and for some life will never be the same again. I would be lying if I said I don’t have dark days. I enjoy running, I love photography and writing has always been one of my escapisms. At the end of last year, with lockdown imminent again, I decided to write a novella that would have feel good factor. With the two main characters already developing in my head, I decided to write a cosy mystery. For several months I escaped with these two wonderful characters, Craig Gardner, ex-police detective inspector and nineteen year old Roo Chattaway. The three of us went on a journey to find answers!

Whilst developing their characters it brought back memories of when my husband and I were members of artistic roller-skating club. With these thoughts, I decided young Roo would be an artistic skater thereby adding a new dimension to her personality.

Serendipity is as much about the main characters as it is about them trying to find answers to questions. The little dog on the cover is not only the series logo, but he has a role in the story too. And of course, a cosy mystery wouldn’t be quite the same without a little romance.

Serendipity is a light read with a warm cosy feel that I hope will leave readers with a smile and, hopefully, wanting more. 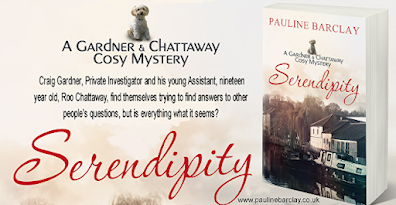 Craig Gardner, Private Investigator and his young Assistant, Roo Chattaway, find themselves searching for answers to other people’s questions, but is everything what it seems?

Why has Mark Cooper not returned home? Is a prominent surgeon having an affair? Could there be a connection between shoes being stolen and the untying of a houseboat? And, how did a body, found by a dog walker, end up in Robinson Glen?

Serendipity, is the first in a new series of cosy, feel good, mystery novellas and is available in Kindle and paperback (from all good book shops).

You can also find me on…

Founder of Chill with a Book Awards