WARNING: if you watch this video promo, you'll want to buy the book! 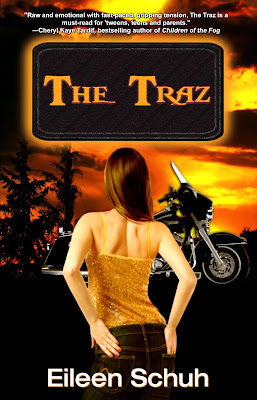 THE TRAZ, a newly released YA novel, is as daring, raw, and spirited as the young heroine.

It’s exhilarating entertainment but it also contains a vital message for those on the cusp of maturity and for the adults who guide them.

Headlines frequently note the violent and criminal lives of the very young.  "The girl was 12,” the headline says, “when she killed her parents and younger brother in their Medicine Hat, Alta. home..."

Perhaps even more troubling is this headline: "Imani Nakpangi was sentenced to five years in jail for forcing the girls, 14 and 15 years of age, into prostitution..."

"A 14-year-old boy was charged,” reads another, “when a would-be pot buyer is slashed with a meat cleaver..."

Schuh’s young readers, however, do not have to face these complicated and unsettling issues alone.  THE TRAZ is released with a Teaching Guide to give youngsters, parents, educators, law enforcers, and other community leaders an opportunity to discuss and explore the darkness that at-risk teens are both facing and fleeing.

What is the captivating story through which these life-lessons flow?

Katrina is thirteen, wealthy, grieving, and alone. But she is more than that. She's intelligent, beautiful, and intrigued by the dangers of street life.

Shrug's a giant of a man with a voice of thunder and eyes of granite. He has tattoos, The Traz gang patch, and a motorbike. When he asks Katrina if she wants a ride, she makes a decision that will change her life forever.

Katrina quickly discovers the violent side of life on The Traz compound.  However, there is no way for her to escape until she meets Chad—an undercover cop with rich brown eyes, a gentle chuckle, and a plan to rescue Katrina from the clutches of the gang.  However, there's a problem.

Somebody is keeping dangerous secrets from them both.

THE TRAZ is netting superlative reviews from some of Canada’s top authors.

"Raw and emotional with fast-paced, gripping tension, The Traz is a must-read for 'tweens, teens and parents."
--Cheryl Kaye Tardif, bestselling author of Children of the Fog

"Schuh creates complex characters and raw dialogue. This is a fast paced novel where redemption is found on the saddle of a Harley."
--Garry Ryan, author of the Detective Lane mysteries

Praise for THE TRAZ

"The Traz is well written and beautifully set up. The author definitely has a plan for the whole series, and it's gonna be good." ―Michelle Latiolais, Reading Lark Reviews

"Schuh creates complex characters and raw dialogue. This is a fast paced novel where redemption is found on the saddle of a Harley." –Garry Ryan, author of the Detective Lane mysteries.

"Raw and emotional with fast-paced, gripping tension, The Traz is a must-read for tweens, teens and parents."―Cheryl Kaye Tardif, bestselling author of Children of the Fog

"The Traz by Eileen Schuh is a novel that not only deserves to be read by young adults everywhere, it NEEDS to be." ―Kelly Komm, award-winning author of Sacrifice

"I finished “The Traz” and absolutely LOVED it. My wife's reading it now." ―Jim Brown, international novelist

"This is the first of a series, igniting an appetite for the sequel. A study guide with moral questions for exploration and resources for students dealing with life issues follow the conclusion of the novel. I recommend this dark and compelling story." ―Garrett Eastman, Librarian, Rowland Institute at Harvard University

"The Traz is an engaging read that is both entertaining and thought-provoking." ―Maranda Russell, freelance writer

"Eileen Schuh is an author to watch out for." ―Kevin Thornton, Director, Crime Writers of Canada

For an excerpt of THE TRAZ visit  Excerpt

THE TRAZ is the first book in The BackTracker series.


Sequel to THE TRAZ
Coming Summer/Fall 2012
from Imajin Books 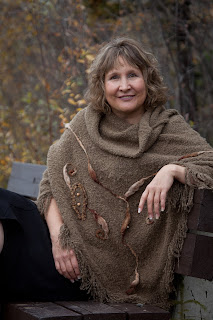 Eileen Schuh is also the author of SCHRÖDINGER'S CAT, a sci-fi novella. Release date: August 2011 by WolfSinger Publications in eBook and print formats.

Born in Tofield, Alberta and with ties to Edmonton and Strathcona County, Eileen Schuh now lives with her husband in the remote northern boreal forests of Alberta, Canada.

Schuh recently retired from a life of careers that varied from psychiatric nurse to journalist to editor to business woman.

She remains active in her adopted community of St. Paul and basks in the love and loyalty of an entire flotilla of family, friends and fans—virtual, imaginary, and real.

For more information about THE TRAZ and the author, or to request an interview:

This book is a tribute
to
people both young and old
who have found the courage to make the right decisions.
It is also a lifeline for those who didn't.
We understand. We forgive. We'll help you overcome.

Special thanks to my beta readers and editors. Without your suggestions, this story would have fallen short.

Thank you to my mentor, friend, and Book Marketing Coach, Cheryl Kaye Tardif

Thank you to my family: Alvin, Renita, Tracy, and Chris—who have always believed I could and should write novels. My grandsons Finn and Petey—you are my inspiration.

To my fans and my friends and my community—there's no doubt you helped me make this dream come true.

Thank you for reading my book.

I hope you all fell in love with The Traz characters, as I did—despite their faults. The Traz is the first novel in a series about the ongoing lives of these characters. I called the series BackTracker—as that is the name Katrina gives to an influential computer programme she develops. BackTracker symbolizes both the power Katrina comes to wield and the way her future intertwines with her past.

The BackTracker characters came to me during a very low and lonely time in my life and began telling me their stories. For months they bore the brunt of my sadness and anger and I, in return, shouldered theirs. Together, connected via words and the keyboard, we found our voices. We learned from one another. We discovered that we were strong despite our weaknesses. But best of all, we came to forgive ourselves and those we love.

It was not until much later that I decided I wanted other readers to meet Katrina, Shrug, Chad, and Sergeant Kindle. For years thereafter I worked at polishing my writing—elevating the BackTracker stories from a personal therapeutic experience to one that would touch many.

This series initially started with Katrina being rescued from the biker gang. However, as I worked on the novels, I became more and more curious about Katrina's year with The Traz. I wondered why Shrug, Katrina, and Chad persistently antagonized each other, why they laid blame yet felt guilt, why they struggled so hard to love. Most of all, I needed to uncover the terrible secrets about life in the compound so I could begin to understand why they were choosing the lives that they were.

It took me months to convince the characters to tell me about that year they met, but once they did, once they laid out their experiences for me (as painful as they were), once they cried with me and surrendered their souls to the truth, only then did the beautiful but heart-wrenching novel THE TRAZ emerge.

To this day, the characters are very shy about going public, especially Shrug. I think he still feels guilt and embarrassment over his questionable decisions and actions. Katrina does, too, but I doubt she'll ever admit that. Sergeant Kindle, with his kindly blue eyes, has the wisdom they need—that we all need—to deal with our regrets and continue on with courage.

I hope you learn to forgive these characters and come to love them. Let them not only entertain you but also teach you about the human heart, the human spirit, and the human experience. The second book in the series, BackTracker I, will be released soon.