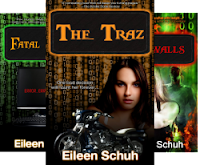 Posted by Eileen Schuh: at 9:29 PM No comments:

Eileen Schuh,Canadian writerwww.eileenschuh.com
Posted by Eileen Schuh: at 10:41 AM No comments:

Chill with a Book!: Reviewed: Shadow Riders by Eileen Schuh

Chill with a Book!: Reviewed: Shadow Riders by Eileen Schuh: 5.0 out of 5 stars A complex and fast-paced crime thriller.... reveiwed by Kenna McKinnon on September 1, 2016 An incredibly grip...