The archaic language...
Or perhaps, the tears.
The short, confusing journeys that take forever.
Surreal. Compelling.
One loses a child and suddenly and thereafter, the world makes no sense.
“Once the tears reached the river the reflection distorted and then reshaped…”

Must re-read this deceptively simple tale... 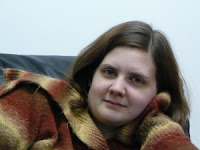 Sarah, why do you write?

Like many writers say, I write because I have to. My mind, my heart and my soul all continually tell stories and I try to do them justice by writing some down. Some turn out to be muddled useless anecdotes that I keep to myself while others need to be shared with the world. I also write because I love to.

If your time and your energy were a pie, how big a piece would be devoted to your writing?

Eight weeks ago I would have said 98% of the pie would be the piece I wanted to devote to my writing, with a sliver being the actual amount I did. Now, with a new born to look after and love I am actually writing a lot more (while he sleeps and entertains himself for a few hours each day) so I'd now say a reasonable size piece, not to make one feel bloated but just right after a healthy meal. :)

People read for many reasons (entertainment, enlightenment, education, spiritual fulfillment.) Which of humanities needs and/or desires do you see your writing fulfilling?

My writing has been primarily focused toward the entertainment aspect of reading. Very light, quick reads that have my readers wanting to read more while they relax on the beach.

With many of my own websites I've been given the opportunity to blog about random things, specific things, meet many fellow authors and aspiring authors as well as learn so much through marketing and writing sites.
I plan to have my writing career take off any day now and, although I plan to go back to my full time job as I love it, writing is what I do best.

Sending You Sammy and Brain Tales Volume One, my two published works thus far, can be found on Amazon, Barnes and Noble and Chapters websites as well as local stores in Comox, British Columbia and Moncton, New Brunswick. Unpublished works can be found at www.SarahButland.com.

What advice do you have for me and other aspiring novelists?

Keep at it! Of course it's a cliche but this one is the best one out there. Do it for yourself most of all, if you're truly a writer the only audience you really need is you. Any readers who love your work after that make you quiver with delight.

Thank you for the interesting questions and for posting this, Eileen. Very much appreciated.
Sarah Butland

Thank you, Sarah, for sharing with us.
Enjoy that little one! Give him a cuddle and kiss for me....
Posted by Eileen Schuh: at 3:43 PM 1 comment:

“We got a fuck of a long way to go to make this thing with Allison Montgomery work,” Shrug offered.
“The language!” Kindle half-heartedly scolded. Shrug hoped his boss never gave up trying to reform him. Kindle’s chastising was the only thing reminding Shrug that he’d once been a gentleman and ought to regain that lost stature. Besides--Shrug tilted his head and stared across at Kindle--he didn’t want to have to think up a new way to annoy his boss.
Shrug cleared his throat. “We “have” a fuck of a long way to go to make this thing work.”
“I was referring to your choice of words, not the grammar,” Kindle muttered.
“Oh.” Shrug tapped his toes on the underside of the Sarge’s desk, a habit that he knew irked Kindle. He tapped his toes again. With so little gleeful happening in his life, antagonizing his old school mate was his most pleasant pastime.
The Sergeant sighed in resignation. “What is it you’re trying to tell me?”

When the young adults in my life start ‘f’ing away on Facebook, or otherwise using the vulgar or blasphemous for no particular reason, I’m the first one to hop in with a comment. “Watch your language, Young Lady!” I’ve more than once chastised, “Sonny Boy, time for bed! You’re makin’ yer Granny blush!”

So where does the writer, the reader, the editor, the publisher, the law—draw the line on abusive, vulgar, hateful, profane language? Just how much freedom does the powerful pen possess?

One critic of my adult novel, Noraebang, drew the line—not at the ‘f’ word--but at God Damned and Jesus Christ, as she believed I was coming uncomfortably close to committing an unforgiveable sin by using her God’s name in vain. She suggested I try Mohammed dammit instead.

But just what is “God’s name?” And what is “in vain”? Although “Jesus” may well have been our Saviour’s first name, “Christ” was/is a title, not his surname. Likewise, when Moses complained to the Creator that all the other gods of that era possessed names and identities, God reportedly refused to provide Moses a name, simply saying “I am that I am, or "I-shall-be that I-shall-be." (Exodus 3:14). Leading to the obvious question, is it even possible to use a nameless god’s name in vain? [Ironically, later generations translated His response ‘I am that I am” into the name “Jehovah”]

Is asking God to damn something or someone, using his name in vain? Or is it a recognition of His power? The thought of asking Mars to damn my computer (or, at times, my Pomeranian) gives me shivers—Mars doesn’t have the power to condemn anything or anyone to the eternal flames of hell and I hesitate to insinuate that he does.

Why does one say, Jesus Christ? If the phone rings just as I open the fridge and the butter falls out and splashes across the floor and I slip on it as I reach for the receiver, I believe my “Jesus Christ” is a plea for help--somewhat like Jesus’ cry from the cross: “My God, My God, why hast thou forsaken me?” (Of course, my cry arises from much less dire circumstances, for sure.)

Yes, profanity of all degrees is powerful and emotionally laden. And we tend not respect those who use it. Sometimes I don’t want readers to respect my characters, or rather, my characters don’t want anyone to respect them--only fear them. When Gator, the leader of The Traz Biker Gang calls 13-year-old Katrina a ‘fucking cunt’, he really doesn’t care what writers, readers, or editors feel about that language. And if I were to alter his words to read, “Katrina, you’re just a fricken Pandora’s Box”—Gator becomes someone other than the Gator that I know—perhaps someone more likeable.

I don’t want my drug-dealing, murderous, mad, and brutal bikers to be at all likeable. That’s one of the underlying themes of my Back Tracker series—society’s admiration of, fascination with, love and respect for these gangsters that grind their groins against Harleys, is badly misplaced.

If my bikers were from Quebec, they might clench their teeth and spit out “Tabernacle!” A British gangster might very well mutter, “Bloody, ‘ell!” However, my bikers are from Alberta, land of the rig-pigging, oil-patching, truck-driving, construction-workin’ Red Neck. So my bikers say, “Fuck” and “Jesus Christ” It’s not at all nice, but if we want to hear their stories, we’re going to have to look past their language to glimpse their evil little hearts and tiny vulgar minds.

My Back Tracker series of novels and the parallel novel, Noraebang, are stories of lost and hurting souls trying to find peace. They are the stories of the abused, the downtrodden, the traumatised. The brutal and the beaten. They speak the language of the street and if we deny these characters their voice, we will never hear their troubled stories of pain and redemption. We will never understand them or their real-life counterparts.

Let’s be careful how we censor and/or censure our writers and characters. Legally, we must not use the power of the pen to incite hatred toward identifiable groups, must not libel, defame, or slander. Must not dramatize the mind and emotions of a pedophile. All these prohibitions are debatable—their results far-reaching—including the prohibition against written child porn. I, along with millions of other victims of child abuse, will never understand the heart, mind, soul, motives, and desires of my abuser because of this censorship. By shrouding the pedophile’s acts, mind, and emotions in silence, we are blinding ourselves--unable to spot the pedophile in our midst, unable to prevent him from inflicting pain. Perhaps this silence increases society’s risk of creating adults prone to pedophilia. It undoubtedly frustrates our attempt to educate the vulnerable and understand the victim.

Likewise, by silencing the stories of those whose language we find offensive, whose actions contravene our perception of morality we may be doing humanity a disservice.

I ask you, is my character’s language, my language? His transgressions, mine? Have I sinned by transcribing the voice of the wicked? Will the reader need redemption for vicariously experiencing the fictional transgressions of a mad man?

Back to Shrug and Sergeant Kindle--it is not only words that we must watch. Although Kindle may say otherwise, grammar is just as important as word choice. Rules of grammar ensure the meaning of our words are clear across many dialects. Don’t find yourself being both misunderstood and rejected because of poor sentence structure, like the manager who was tasked with cutting the company’s expenses to survive the recession. He did all he could, but it boiled down to the fact he had to let one of his staff go. It was a tossup between Mary and Jack—both of who were good workers and neither of which had seniority. He decided that the first one to visit the water cooler the next day would be the one to get axed.
Mary came in first, suffering the effects of party the night before and headed straight to the cooler.
“Mary,” the manager said hesitantly. “I’ve never done this before. But I have to either lay you or Jack off.”
“I’d rather you didn’t lay me,” she said. “I feel like shit this morning.”

For an upbeat and utterly clean video clip on this topic, check this YouTube link. Thanks to my cousin, Barbara, for bringing it to my attention:

p.s. for those seeking it, and for me to avoid being sued for advertising something I didn’t offer, or being castigated for "online lying," here it is: