The long and the short of it...

"Bikers vs cops on the Canadian prairie...oh, and throw in a thirteen-year old girl" (THE TRAZ)

"One mistake and a young man dies. Someone must shoulder the blame." (FATAL ERROR)


"Two worlds, two lives, too much for one woman..." (SCHRÖDINGER'S CAT)

"The identity of those who stole the libido of an entire generation of women may be forever hidden beneath the collapse of the world wide web. #Conspiracy (DISPASSIONATE LIES) 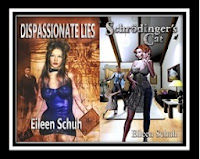 Ah, yeah. Those troublesome promo tweets, that difficult one-page pitch to agents and publishers, the all-important back cover copy.

Summarizing one's novel to fulfill publishing and promotional needs is one of an author's most difficult tasks.

"Capture the essence of your 100,000-word story in 200 words or less," says the publisher as the cover for one's novel is readied for press. "Write some 140-character tweets, create a one-liner for the front cover. Make it interesting. Don't include spoilers and for heaven's sake don't say how it ends. Keep it truthful. Name names. Address your target readership. Reveal the main plot. Create suspense. Mention the romance..Make it compelling for kids, appealing to adults. State the genre..."

You're kidding me, right? If I wanted to write short-stories, I would. There are not 99,500 useless words in this book. It's not just romance, or crime, or a thriller. It's not just for teens. The story is about a murder, how can I NOT reveal that? She struggling with her past, but she's also solving cybercrime. She disobeying orders AND falling in love. And what about him? What about all the great stuff he does and says within those 100,000 words? And the other guy, the one she hates?

Her career--hey, guys what about her crime fighting career? And shouldn't we mention her incredibly high IQ? Her shortness? Her mesmerizing azure eyes? His broad shoulders...the prairie grass? The loons and coyotes? That metal shed on the prairie where the blood spilled? The flickering fluorescent lights in the interrogation room? How about Gator's evil eyes? The smell of beer? The facts she's an orphan, wealthy. A drop-out, a street child?

How about those stiff and staid legal guardians of hers? What about the books in the series before this one...?

It's not easy knowing which words and details will attract readers. I have found the most painless way to produce these summaries and promos is to do it aloud. When someone asks what my books are about, I pay heed to my answers. I'm not going to ramble for half an hour, so what am I going to say?

It depends on my mood and the person asking, too, perhaps. Sometimes I first mention my favourite character. "There's this young girl...Sometimes I start with the genre. "My BackTracker Series is gritty teen fiction." Sometimes I note the differences in my books. "Katrina's thirteen in THE TRAZ and ages to twenty-two in FIREWALLS." Or, "THE TRAZ is the first in my crime series but I also  have two SciFi novellas out".

Sometimes I notice the similarities. "All my fiction contains elements of crime and psychological drama." Sometimes I note kind words from reviewers. "I get many compliments on the endings of my novels."

It is quite surprising how much info one can pack into a few sentences. I closely watch to see which words spark the most interest in my listener.

"It's about this violent biker gang, The Traz..."
"This young runaway girl witnesses a gang slaying..."
"It's about gangs and drugs and murder..."
"This undercover cop recruits a young girl into The Traz...She doesn't know he's a cop...oops. Too much info"
"She's a police officer with Post Traumatic Stress...She denies it and refuses help. Things get pretty mixed up for her. She's feisty, though."
"She falls in love with this guy when she's thirteen but by the time she turns eighteen, he's married."

It takes many tries, but sometimes one sentence appears that just lays it all down on the line.

"Her testimony as a child brought down the gang. Now the bikers want revenge." FIREWALLS.