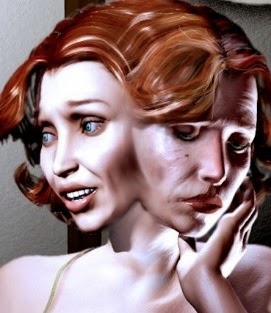 Intensely emotional scenes are sometimes my favourite. What's more emotional than parents trying to deal with each other...and a dying child?

He raised the cup halfway to his lips. “I’m taking Krystaline to Seattle,” he said. He took a sip and began turning towards her. Chorie held her breath. Was he actually going to look at her? Have a conversation with her? He stopped turning, though, and gazed out the window at the bright Alberta summer sun.

It was well past six pm, but it wouldn’t be dark for hours. The summer solstice had just passed. The longest day. June 21, Krystaline’s birthday. Last week she turned eight. She would never turn nine. “Seattle?” Chorie asked." ~excerpt ~  SCHRÖDINGER'S CAT

Don't worry, it's only in one universe where Krystaline is dying in this SciFi tale that explores quantum physic's Many Worlds Theory.


Science can have surprising endings.When one's favourite passage appears on the last page of the book, one knows one read an excellent story:

The smile dropped from Gus’ face. His eyes glazed. “Don’t you remember?” he asked. His pace slowed. It was going to take him forever to get to her. She hoped it did. She hoped he never said what he was about to say.


She locked her eyes on his as he came nearer and nearer. Terror started at her toes, tingled up her legs, froze her tummy. Her breathing ceased; her heart slowed. He glided toward her. ~excerpt ~ SCHRÖDINGER'S CAT

"a book that engaged all senses and emotions"