Katrina Buckhold: Fall under her spell


I was mesmerized by her the moment we met. Like many before me and everyone after, I fell under the spell of her blue, blue eyes. It would not be until much later that I’d realize how dangerous that could be. 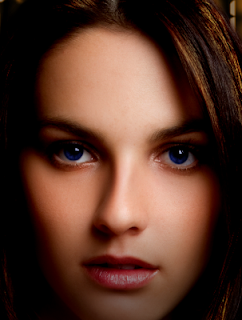 She’d go on to topple North America’s most notorious biker gang, run circles around the media. Almost take down an entire police department. Out-maneuver the Supreme Court of Canada. She was exceptionally wealthy. Conniving. A genius. She was fourteen when I first met her. Katrina, the young heroine of my BackTracker Series.

She came to me during the witching hour when I ought to have been asleep but when troubles were keeping me awake. I saw her there, tiny and trembling on an autumn ridge—her belly pressed to the ground, listening. Watching. Below her in the valley, tattooed men in leather jackets with THE TRAZ biker gang patch  moved slowly between rustic cabins and Harleys, M16’s slung across their backs, unaware that off on the horizon a tactical team was moving in.  However, she could see the police vehicles careening into the compound, safely making it past the perimeter sensors she’d surreptitiously disabled just hours before.

She was listening for the thud of the police chopper. She was going to be rescued. Leave the gang life behind. Forget everything bad that had ever happened to her. Except...

Except what?  I had to find out. I had to get out of bed, pop open my laptop and begin typing this story that was unravelling in my mind. I had to.

As dangerous as Katrina was, as obsessed as I became with her, as powerful as she was to prove—the most important thing to me about Katrina is that she opened the door for me to fulfill my childhood dream. Because of her, I became a published novelist.

Her story, her secrets, her desperation filled my cold and lonely night times for months. It was her, who she’d been and what she might become, that kept my fingers pounding the keyboard. It was her incredible tale that forced me to eventually concede that she hadn’t dictated me THE TRAZ and six sequels simply for my own benefit during that tough, very tough winter.

She made it clear that her story was meant to benefit the world.

She’s the main character in THE TRAZ, FATAL ERROR, and FIREWALLS. She’d love to  have you, too, helplessly fall under her spell.