In fact, depending on circumstances, time, or other unknown factors, what is embarrassing one day, isn’t on another.

Embarrassment is a very uncomfortable emotion and leads to strange behaviours such as blushing, sweating, stammering, and talking profusely--behaviours which in themselves, are embarrassing.   It is accompanied by an intense wish that things were different.
It seems to be caused by social blunders, misunderstandings, forgetfulness…and, most recently in my case, one’s own fictional characters.  It can happen in front of others or when one is totally alone and can be triggered by mere memories of situations and even by totally imaginary situations.  Back to my characters…

I learned early in my writing career that to create complete and complex characters, I had to turn off my conscience censor and stifle my inhibitions.  I had to let my characters do and say things that I, personally, would NEVER do and say.  Then, to top off my discomfort, I had to write about these things. *blush*

I discovered that if I didn’t give my characters free rein, I ended up with a novel populated by a cast of characters who were all just like me (i.e. quite boring).

I did hold some moral discussions with my characters and tried vigorously to tone down some of their behaviours and language—to no avail.  It seemed to matter not at all to either the characters or my muses that I found their behaviour offensive.

We reached some sort of truce along the way—I’m not sure of the exact rules of the ceasefire, but let’s say I just completely capitulated and allowed them to tell their stories the way they wanted.  Don’t judge me harshly—do you know how hard it is to write novels if you don’t have the characters’ cooperation?

Truce or not, it soon became clear that just as I found things offensive, apparently so do agents, publishers, readers… 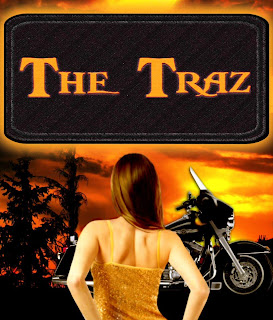 For example, I hadn’t at all liked the way some of the police officers acted in THE TRAZ  (and in the rest of the BackTracker Series).  They were at times well, totally unprofessional.  It turns out, I’m not the only one who thinks cops, fictional or not, should act like cops.

Even when I pointed out news headlines of cops engaging in nefarious and less-than-stellar and sometimes even criminal behaviours, many readers were still uncomfortable with the idea of bad cops.  It seems Canadians in particular don’t like their cops portrayed in a bad light, even though they watch American TV shows about bad cops all the time.

To avoid being embarrassed by my cops’ bad behaviour, I refrain from mentioning it.  However, I absolutely dread the day someone asks me about it.  This is the type of embarrassment that occurs when one is alone and merely thinking about a potential situation.  I blush deeply when I imagine a reader, especially one in, say, law- enforcement, questioning the moral rectitude of my off-beat men and women in red serge.

However, the embarrassment I suffer most is caused by the language of my characters.  Now, I personally don’t swear (especially if there’s a possibility someone might hear me), but (may Mama forgive me) I’m writing about street people, drug dealers, and biker gangs.  My characters swear.  A lot.  And even frequently use that dreadful “f” word.

My mother wrote several notes to several elementary teachers and librarians in my younger years, advising them that I was to have full roam of the library.  I was to be allowed to read whatever I wished to read and thus began my championing of freedom of the press, freedom of artistic expression and photography (re National Geographic Magazine’s notorious photos of nude cultures), and other such freedoms.

But having said all this, why am I becoming increasingly embarrassed and apologetic regarding my characters’ language?  I feel compelled to tell potential readers to beware of the ‘f’ word (I don’t mention the torture and murder as, strangely enough, those have lost their ability to embarrass me and, presumably, my readers.)
That trying time between crawling into bed and falling asleep is being taken up more and more by embarrassing thoughts about The Traz characters to the point where I’ve firmly decided my next novel will be a Christian romance, thereby freeing me from these night sweats and day jitters.

In my next book, we’re gonna have a cast of morally upright people, speaking sweetly in a soft, southern drawl, having grand adventures, and finding wholesome, clean love.

Yes…we are because—I CAN NO LONGER STAND THE EMBARRASSMENT!

Ironic you should post about your characters embarrassing you. I too have that problem...my main heroine is very inappropriate at times, and my hero is an alcoholic officer who is a real a-hole most of the time. ROFL I can't seem to tame them. Anyway, I'm still trying, but until they start to behave, I'm afraid to let their story see the light of day; I will piss off too many people in my home country of Canada, and probably most of the people south of the 49th. Good article...really enjoyed it, probably because I can relate.
S.L. Bartlett

I'm glad I'm not the only one with this problem.

Sometimes to quiet the characters' protests, I'll cut their embarrassing deeds or words but rather than delete them, I'll save them into a special file. That makes it seem that although they really did say and do whatever it is I cut, it's unfortunately a scene that didn't make the final cut and won't appear in the book

That doesn't always work, though. You can only fool characters for so long before they up and protest--or occupy or something....