Don't write what you know; write what you care about -- passionately!
That’s the advice on my publisher’s home page WolfSinger Publications and that, says my book marketing coach is what sells books.  Passion and emotion, says Cheryl Tardif, establish a deep connection between reader and writer.
I am passionate about my books, surprisingly so, sometimes.  I decided long ago that I wanted to write trade fiction, I wanted to entertain.  I did not want to be scholarly or literary or poetic. I wanted to get out of Journalistic writing.  I did not want to change the world.  Just entertain.  I wanted to appeal to the masses.
It turns out, however, that’s not at all what I wanted.  I’m not sure how social importance snuck its way into The BackTracker series.  Not sure when I noticed it was there.  Not sure when I realized THE TRAZ had value waaay beyond pure entertainment.

I wrote the BackTracker series during a very low and lonely time in my life.  It was a time that had absolutely nothing to do with youngsters, or bikers, or drugs, or cops.  It had to do with being so alone, and hurting, and devasted, and lost that when a cast of fictional characters began mentally dictating their stories to me, it didn’t seem strange.  I enjoyed their company and became immersed in their tales, both day and night.
I cared deeply about those characters.  I worried about what was to become of them and wondered where it was they had come from--what it was that had moulded them into the hurting, angry, caring, courageous, and at times maddening people they’d become.
That they were revealing my soul, not their mythical ones, did not occur to me because, after all, they were totally different from me.  They swore a lot (even the f-word), sold drugs, and murdered. Their lives were full of relationships and adventures. They faced danger.  They looked death in the eye.
My BackTracker characters were doing things, striving for things, accomplishing things.  They were growing, overcoming past traumas. Controlling their destinies.  I knew beyond a doubt that they would eventually win their battles—and the bad guys would lose theirs.
My daughter told me writing was good therapy for me.  I thought she meant it kept me busy doing something so that I didn’t have to think about all that was wrong in my life. When one of my promoters demanded that I cough up the story (MY story) behind the series I began to realize how much of myself--my problems, my pain, and yes, my courage--coursed through these books.
Not until I was told to pick a target readership for THE TRAZ  did it dawn on me that others, too, could not only enjoy but also learn from these stories.  Although the stories arose from my pain and delivered their lessons to me, they were meant to be shared.  The BackTracker books could touch and heal other souls.  They were, beyond a doubt, much more than pure entertainment.  They contained deep messages—not just notes to myself, but notes to young people and notes to the adults in their lives.
These messages, woven into the stories’ emotional, exciting, thrilling, and dangerous plots, could reach out and touch and change.  THE TRAZ could help keep kids safe.
What a neat thing to discover about one’s life’s work. 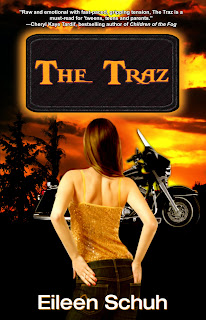