What’s it like to get your first book published?

For those of us destined (so far) to live vicariously through our fellow writers, I invited Jan Markley to tell it to us like it is. I’m very honoured that she agreed to make time in her busy schedule to share with us the details. 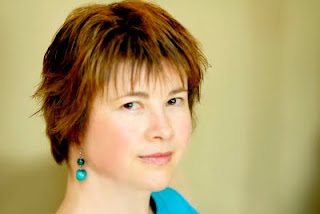 Although Jan has seen her creative non-fiction and humourous personal essays published in the Globe and Mail and West Word (magazine of the Writers Guild of Alberta), "Dead Frog on the Porch" is her debut novel. She describes it as “...a comedic mystery adventure for middle grade readers.” It is the first in the Megabyte Mystery Series.

Jan lives in Calgary, Alberta and is active in the writers’ community through the Writers Guild of Alberta, Young Alberta Books Society and the Society of Children’s Book Writers and Illustrators. She’s a big believer in writing critiquing groups and has been a member of the Kensington Writers’ Group for several years.

She has a Master of Arts, Social Science degree in Cultural Anthropology. She’s proud of her thesis entitled: “Walking in the Footsteps of our Ancestors”: Present Day Representation of Peigan/Blackfoot Cultural Identity, University of Calgary (2002). She enjoyed researching her thesis at the Peigan First Nation in southern Alberta. In order to feed her keen interest in other cultures, she has travelled extensively, most recently to India.

Jan:
“It was important to me that my novel get published as I worked as a professional writer for many years as a journalist. But being a writer is more about who I am as a person than a profession. I have always been a writer.

The writing of the book, the craft, was very important to me. I wanted it to be a well-written novel for middle grade readers aged 8-12 as I think that age group demands a good story. It is gratifying to see the book and to hear what children think of it after they read it.

Eileen: With this question, Jan, I’m looking for some words of encouragement for those of us still waiting for our first book to become a reality. How many rejection letters did you get before you received your first publishing contract?

Jan:
"Many. I documented my ‘how I got published’ story on my blog which is called: Three Dead Moths in my Mailbox: From Finished Manuscript to Book Publishing contract. (To read more , click on this link to Jan's blog (http://janmarkley.blogspot.com/ )

I found the three keys to getting published were rewriting, persistence, and stalking!"

Eileen: Did you come away with anything positive from rejections?

Jan:
"Yes, as you know there is a hierarchy of rejection letters. I sent out queries and then was asked, y a number of publishers and agents, for my full manuscript which was a good sign. Then I began to get long rejection letters outlining what they liked and what was the stumbling block to them publishing it. They would then outline suggested areas for rewriting and ask me to resubmit it. This happened with a couple of publishers so I knew that I was getting closer.

If you find that you get several rejections that mention the same issues, such as plot or character, then you need to look at that seriously.

If you are getting form rejection letters then perhaps you sent the manuscript out too early and need to do a couple more rewrites."

Eileen: How did you learn you were being offered a publishing contract? Tell us about that moment.

Jan:
"It was an email from my publisher Crystal Stranaghan. I wrote about it on my blog as well as in an article for the WGA (Writers Guild of Alberta)"

(To read her account of those breathless first moments click on this link to her blog: It was a cold and lonely Tuesday )

Eileen: After signing the contract, what was the next most exciting thing to happen?

Jan:
"Oh, lots of things, getting a website up, starting a blog, planning a book tour.

Seeing the book in my hot little hands for the first time was great. The book launches were exciting. And most recently, one of the most exciting things was seeing my book randomly stuffed into my niece’s backpack – just like a regular book!"

Eileen: Your book has been recently published and you are now promoting it. Tell us about the pros and cons of that aspect of your profession.

Jan:
"Well, now I’m a tadpole in a very large pond of literary frogs. As you know, there are many great Canadian writers and I am thrilled to be in their company, and I’ve benefited from their advice over the years.

I think it’s a continual process of looking for opportunities to promote your book and talk to parents, teachers and librarians about it.

I joined a number of organizations such as the Young Alberta Book Society, the Society of Children’s Book Writers and Illustrators, and I’ve been a member of the Writers Guild for years." 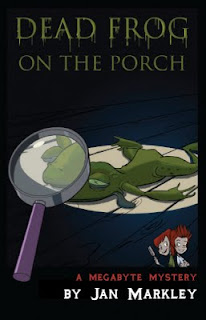 Eileen: Tell us a bit about “Dead Frog on the Porch”.

When twin sisters Cyd and Jane are propelled into an international plot that involves evil scientists and giant genetically stretched frogs, the girls are in a suspenseful and hilarious race to save the frog kingdom.

Feeling bad after she accidentally killed her sister’s frog, Cyd gets caught up in Jane’s obsessive search for an answer to the mystery. But first they have to get past their scientist mom who sides with the geneticists, and the police who don’t believe them. The girls use the Internet to track down the culprits, outsmart them with an antidote to the serum, and expose the scientists for the harm they are causing to the frog kingdom.

Slithering out of a near strangulation by a boa constrictor, and a way-to-close-call escape from a plant vault, their safety is in danger as they get up the noses of the scientists. If their love of animals wasn’t enough to motivate them, scratching yet another mosquito bite, the girls discover the link between frogs, the environment and humanity

The modern characters routinely evoke the spirit of Nancy Drew and use technology and old fashioned curiosity to solve the crime. Armed with strong personal convictions about animals and the environment, the characters act on their belief that kids can change the world even if it is one frog at a time.

The novel started as a ‘write an incident from your childhood’ writing exercise, so I wrote about the time I accidently killed my friend Jane’s pet frog. I recently found Jane and blogged about what it was like tracking her down and finding her after all these years. She still has pet frogs and kept them far away from me when I visited!"

Eileen: What is your advice to those of us still seeking a publisher?

Jan:
"Do your homework. I think the biggest mistake writers aspiring to be published make is sending a manuscript out before it is ready. A first draft is just that. Send it through your writers group or your beta readers, then rewrite and rewrite some more.

Learn as much as you can about your craft, and read in the genre you are writing and other genres. My blog is about where writing meets life and where life meets writing and I post about aspects of story development and writing.

Eileen: Where can we buy “Dead Frog on my Porch?”

Eileen: When will your next book be out?

Jan:
"The next book in the Megabyte Mystery series is called, "Dead Bird through the Cat Door" and should be available fall 2010 from Gumboot Books."

Eileen: Again, thanks so much, Jan. Doing this interview was truly a thrill for me.

Many thanks, Jan, for sharing your story. Congratulations on your publishing success.