When the bough breaks...

Today I welcome Author, Luke Murphy to Magic of the Muses, in celebration of  his upcoming release, Rock-A-Bye Baby. This is Luke's third guest appearance on my blog. He first visited here in June 2012 to introduce us to his debut novel, Dead Man's Hand. And in July 2015 he presented, Kiss and Tell.

Yep, I think he has a crime series going here....take it away, Luke!


Writing a Sequel
This is my second go at writing a sequel, but it always feels like a new experience for me. ROCK-A-BYE BABY is the second book in my Charlene Taylor series. I have no plans, no idea how many books I’ll write with these characters. I’ll just write, and see where the characters take me. Who knows?

There are definitely some benefits to writing a sequel.

PROS:
Characters
For one, the main cast of characters is already formed. Readers are familiar with the main characters in the series, and there is no need for a lot of backstory to get readers caught up, or a lot of explicit detail to show character traits and physical appearances.
Setting
Since I already researched the setting of my first novel, I can save that time in novel #2, because I am already familiar with the city (Los Angeles) that I’ve chosen for the setting of my adventures.
Readers/Fans
Since I have book #1 under my belt, I’ve already formed a small fan base and readership who are earnestly awaiting my next novel. I won’t have to worry about reaching those readers, as they are returning customers, and will already be searching out my books.
CONS:
Expectations
Because KISS & TELL garnered so much attention and success, now there is a level of expectation that comes with my next book. With so much praise and five-star reviews, readers have a high expectation of what they are looking for with a new Charlene Taylor book.
Time
I don’t have to tell you that it’s a lot faster to read a book than it is to write it. Readers are expecting another book as soon as they finish reading the previous one. It took me four years to write the sequel to KISS & TELL (sandwiching another book in between), and once readers have finished ROCK-A-BYE BABY, they will be expecting another Charlene Taylor adventure. I might not have time to breathe LOL
Ideas
There are only so many ideas/conflicts to write about, so coming up with new, fresh ideas for my characters with each new novel, can possess a bit of a challenge for a writer.


With all that said, I really enjoyed writing ROCK-A-BYE BABY, the sequel to KISS & TELL, and I look forward to possibly writing more Charlene Taylor adventures in the future. 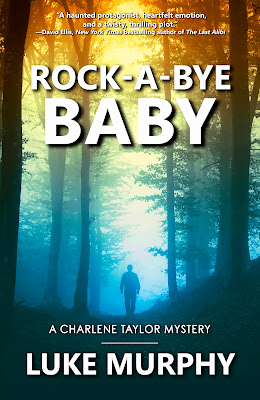 In the city of Denver, a series of baby kidnappings has the town devastated.  With no ransom demands and no contact from the perpetrators, local law enforcement is at a dead end. No motive equals no answers.

Charlene Taylor’s niece becomes a victim, and the LAPD detective is thrown headfirst into a whirlwind case with similarities to one from seven years earlier. Out of her jurisdiction, and with no friends or leads, Charlene must walk-the-line between cop and sister.

Who can she trust?
Charlene has to decide who’s an ally, and when an unlikely partner steps forward, they must race against the clock: because that critical 48 hour window has come and gone.

What the reviewers are saying:

“Rock a Bye Baby has everything—a haunted protagonist, heartfelt emotion, and a twisty, thrilling plot.  A scorcher of a follow-up in a promising series.”—David Ellis, NYT bestselling author of The Last Alibi

"Murphy has cleverly crafted a riveting crime thriller, with a hefty dose of white-knuckle suspense. Entertaining and enticing to the very last page."—Cheryl Kaye Tardif, bestselling author of Submerged

“Rock a Bye Baby is an exquisitely told thriller, full of surprises and terrifying moments. Murphy is a gifted storyteller who keeps the tension crackling throughout. Charlene Taylor drives the story to a very satisfying and unexpected ending.”—Kristina Stanley, bestselling author of the Stone Mountain series.

Prior to becoming a novelist, Murphy played six years of professional hockey, retiring in 2006. His sports column, Overtime (Pontiac Equity), won the  2009 Best Sports Page in Quebec Award and was nominated for this award in 2007. Murphy also worked as a radio journalist at CHIP FM 101.