I'm heavy into revisions of the third novel in BackTracker series which deals with gangs and drugs and the violence that accompanies that combination. So perhaps it wasn't any wonder that I dreamed a young lady was telling me about some locals who were smuggling cocaine across the border for a gang.

Sometimes gangs will pay people without criminal connections (referred to as 'mules') to carry drugs in their baggage when travelling, believing their innocent backgrounds will help them clear security easily or if not, so what, really? The gang loses a few dollars to the mules and a few ounces of the white stuff to border patrol and carry on.

"Do they realize how dangerous smuggling drugs is?" I asked the lady.

"It's a risk they are willing to take."

"They could end up dead! Gangs are violent, dangerous, ready to exact revenge or retribution at the drop of a hat."

"They know, but they find it exciting."

"The drug world is so violent! They could end up dead so easily! Do they realize that?"

"Yeah, they know it's risky but do they understand dead?" I ask, my passion increasing with each word. "Do they understand that dead is not being able to cuddle your child. Dead is never again seeing a sunset!" I'm really winding up now. "Dead is not hearing the whisper of the summer wind in the poplar leaves!" I'm at the cabin for the weekend. The sun is rising, my window is open. The birds are stirring. It's 3:30 a.m. "Dead is--"

And I woke up missing my mom. 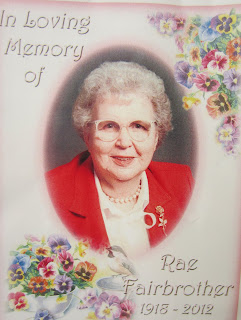